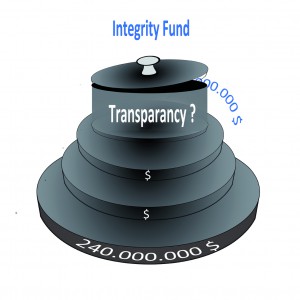 Where has that 240 million dollar gone?

Promotion of integrity is often second or third priority. ‘No budget’ is the most famous clincher. In 2013 OESO reminds The Netherlands to act more forcefully against companies that are involved in corruption abroad. The public prosecutor prosecuted only 8 of the 22 known corruption cases. The Ministry of Foreign Affairs convene a target group. The message to the participants, including organization for CSR and transparency, was disappointed. The Ministry has no money for the work to be done.

At the same time Public Prosecution makes an arrangement with an international operating Off Shore Company. An arrangement means that no one comes to court despite committing a crime. The penalty and the arrangement amount together 240 million dollars. $ 200 million as compensation for unjustified obtained profits. Let’s say money that was spent on bribes.

Where has this money gone? Probably to the general state budget! Not to organisations that fight corruption and develop programmes for business integrity.

With corruption are large sums of money involved. With more manpower Public Prosecution could prosecute suspected companies more effective and bringing to court. The penalties and arrangements could contribute to a fund to finance integrity programmes. Indeed, bad money to good money! Not only in The Netherlands but also in all countries. It involves huge sums.

The clincher of ‘no budget available’ then is off the table